I saw the shark movie The Shallows, but this won’t be an actual movie review. I’ll just say there was a lot of blood, so if you don’t like the sight of that, you may want to avoid it.

I mainly went to see the movie for research purposes: It featured a woman trapped on a small rock in the sea. That was the predicament of Andromeda. You might remember she was a princess in Greek mythology who was chained to a rock, waiting for a sea monster to eat her. Usually she is portrayed as chained to a vertical rock face (and this is often just an excuse for artists to paint a naked woman).

But the Andromeda’s Rock is located off the coast of Israel. Yes, Greek myths could be rather far-flung. It is a horizontal bit of rock, and I think the flag is not much taller than a man. 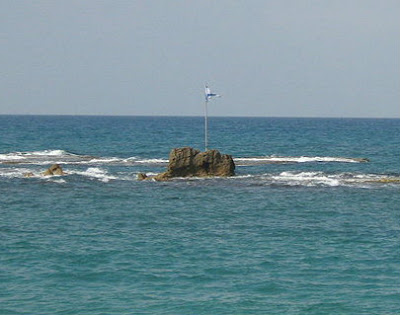 אני צילמתי
Sorry, no nude art
Here is an excerpt from one of my Athena stories, where Athena and another immortal visit Andromeda, but not to rescue her.

They circled lower, towards a crude but level rock that barely jutted out of the sea. Water lapped at all sides. The rock was barely wide enough for a man to walk a few paces from one jagged edge to the other, but the figure who stood there was a woman. Not yet in her twentieth year, she faced the city and its shore, shoulders slumped in exhaustion, looking for help that refused to come.

When Athena had descended far enough, she flew within range of the woman’s vision, barely above the waves. She landed on the rock as slowly as she could. “Andromeda, don’t be afraid. I want to give you some comfort.”

Her hands gestured wildly, but she couldn’t lift them above her waist. Chains led from her wrists to where they were fastened to cruel iron bands in the black rock beneath her feet. The chains were not meant to prevent her from escaping: No mortal would disobey the ban by rowing out here in a boat to rescue her. The iron links were to prevent her from being swept off the rock prematurely. She was meant to be a living sacrifice.
Posted by Mark Murata at 7:49 PM

Such a sad, sad story.

Yikes. I don't think I like the end of that excerpt, but I'm betting the twist it brings about is epic.