I was doing some errands this morning when I saw an amazonfresh truck pull into a fast food joint: 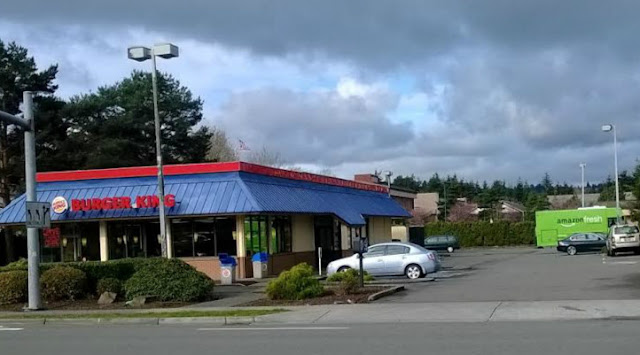 If you look at the right side of the picture, you’ll see the amazonfresh truck. To be fair, the guy was just getting some breakfast. But it's fun to imagine this is what would happen if a local Burger King ran out of food.

I haven’t seen a food truck scene this funny since I saw the Oscar Mayer Weiner Mobile after I got home from a Worldcon.
Posted by Mark Murata at 2:52 PM 5 comments:

Young, Blonde, and Out for Revenge—Review of Falcone Strike

Falcone Strike is Christopher Nuttall’s sequel to The Oncoming Storm (see my review here), so we know that Kat Falcone survived the hair-raising climactic scenes in the first book. A hero of the Commonwealth, her reward is to be given an impossible mission: She must lead a flotilla of decrepit ships that are old enough to be called antiques behind enemy lines, raiding as much of the enemy supply lines as she can.

It takes so long to install modern parts on the ships, half the crew get assigned to other missions. They get mismatched crew members—including shore patrolmen, who used to get in fistfights with crew on leave. But Kat still has Williams, her executive officer, whose long experience and steady hand were so vital in their original adventure.

So, leading a flotilla that could be vaporized by one broadside of an enemy dreadnought, Kat goes to do as much damage to the enemy as possible, to make up for the shellacking they gave her Commonwealth. 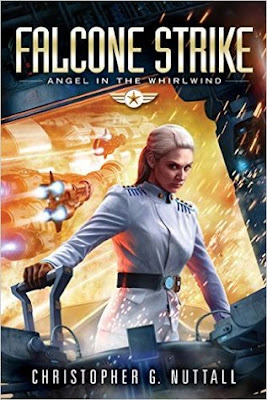 Once again, Christopher Nuttall has delivered a fresh and believable military science fiction novel. We are right there with Kat Falcone as she has to grope her way through uncertain space. Her dilemmas are laid out by realistic dialog, and although each decision has its pluses and minuses, we can see her reasoning.

This is a hardened Kat compared to what she was like in the first novel. If a civilian enemy ship is given the chance to surrender and it powers up its engines, she destroys it.

William, her executive officer, uses his experience and contacts to get in with raiders, which anyone else would find impossible to do, to extract needed information from that disgusting group. And we get more insight into the nature of the enemy, who are striking out from their home planet of Ahura-Mazda—religious fanatics with whom there can be no compromise.

As with the first novel, Nuttall set us up for conflicts that did not occur—no fistfights among the crew, no equipment failure at critical moments. And he still italicizes words to show stress in the wrong part of a sentence, if you know what I mean.

But get The Oncoming Storm, then Falcone Strike. If you like science fiction and are not familiar with the military side, or vice versa, these will be good reads.
Posted by Mark Murata at 8:33 PM 1 comment:

Here’s an excerpt from my historical fantasy manuscript. Iphi (short for Iphigenia) was taken away from her family in Mycenae, in ancient Greece. Now a grown woman in a foreign temple, she sees unexplainable events happening one night. This is how the chapter ends.


Noise surrounded the temple—rushing winds. Iphi stopped with her mouth open. A chill like a winter stream crept up her back. The sound wasn’t a low roar but higher, as if whistling through cracks. It resembled a woman’s scream.

The wind blew in through the high windows, and the lamps flickered wildly, casting weird shadows on the plastered walls. One by one, they blew out in their sconces. Iphi regained her ability to speak. “This can’t be. The wind reaching the lamps?”

It started with the ones closest to the double doors. The darkening of the lamps ebbed towards them, the far parts of the walls and stone slabs of the floor disappearing from sight. It was as if some unseen being was approaching, trapping them in darkness. As the last two lamps on either side of the hall remained flickering, she knew their light was what stood between her and madness.

She felt arms about her thighs and looked down to see Melinta holding her. The grip of her strong hands was uncomfortable, but she couldn’t bring herself to shrug off the girl, whose wide eyes showed silent fear. The other three women were whimpering as they huddled together, their black eyes and red lips hideous in the failing light.

Iphi looked back in time to see one of the remaining lamps go out. She stared at the last one, holding her breath, waiting.
Posted by Mark Murata at 6:51 PM No comments: