So I was relaxing in a park in Bellevue (a suburb of Seattle) on Memorial Day when I heard a distant buzzing sound. Sure enough, when I looked up from the beach towel I was lying on, a drone was flying high above. 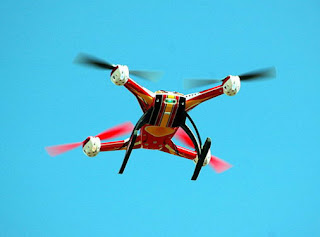 (The actual drone was more yellow. I was too relaxed to take a picture.)

A couple nearby also spotted it and pointed upward. The woman was more disturbed about it than the man was.

To me, it’s just a part of life now. Seattle is now in the top twenty cities in the U.S. for drone usage. As a reminder, here’s how someone buzzed the Space Needle with a drone, which was legally questionable and should not be attempted.