Hosing Down Seattle – Review of Too High & Too Steep

Did you know the hills of Seattle used to be steeper than the hills of San Francisco? During the late nineteenth and early twentieth centuries, immense projects using water cannons washed dirt down from the tops of the hills. More earth was moved in these projects than in the digging of the Panama Canal.

Too High & Too Steep: Reshaping Seattle’s Topography by David B. Williams chronicles these projects in fascinating detail. Of course, the houses and other buildings on these hills had to be moved. The cover shows the “spite hills.” These were what were left partway through the project, when people were refusing to leave. 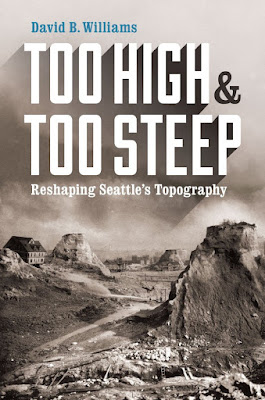 The height of those leftover hills show the original height of that part of Seattle. For you locals, if you’ve ever puzzled over the term “Denny Regrade,” that’s where the term came from: Denny Hill in Seattle was regraded more than once. From the tallest point of the original Denny Hill, over one hundred feet has been removed.

Where did the dirt go? It was dumped into Elliott Bay, part of Puget Sound. Part of it makes up the land between Seattle and West Seattle. As you can imagine, geologists are concerned about that land slumping into Elliott Bay during an earthquake.

If you’re not familiar with Lake Union, it’s a sizable lake inside Seattle. It used to be landlocked. Canals were dug connecting it to Lake Washington to the east and Puget Sound to the west. When that happened, Lake Washington lowered dramatically. If you’ve ever shopped in University Village, it used to be underwater. Sand Point, which had a Naval base for a long time, roughly doubled in size. And people realized there was a nice beach on the Eastside suburbs of the lake, named it Juanita Beach, and tourists flocked there (though it is now part of Kirkland).

Back to flushing dirt off the Seattle hills. Was it worth it, to force those people out of their homes, to have this massive government project to lower the hills, and to dump the dirt into Elliott Bay? David B. Williams says no. Private enterprise, in the form of the motorcar becoming more common, would have made transportation on the hills fairly easy.

So it was a huge government boondoggle. We have something similar going on now, with massive tunnels being dug beneath Seattle for commuter trains, a project that is way behind time and massively over budget, though the private enterprise solutions of Uber and driverless cars are rendering that project obsolete. But that is another story.
Posted by Mark Murata at 4:26 PM 2 comments: Links to this post

I’ve never seen the Netflix series Stranger Things, starring Winona Ryder. Apparently some of it takes place in a sinister lab in a forest run by the Energy Department.

This got under the skin of Paul Lester, who runs one of the official blogs for the Energy Department. Uh oh. 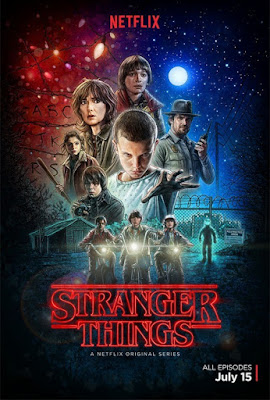 Actually, Lester has a sense of humor, and he uses the series as jumping-off points to highlight the work of the Energy Department. He assures us there is no such sinister lab, but they do have one in the Argonne Forest in Illinois. It “was founded to continue Enrico Fermi’s work on nuclear reactors.”

The problem is, I remember watching a show on PBS about how Enrico Fermi was doing secret experiments in Chicago to make a nuclear reactor—in the city itself. He even had a man standing with an axe at a rope holding a bar of graphite. At Fermi’s signal, the man would cut the rope and the graphite would fall into the crude reactor, stopping a runaway reaction. Though if there were a huge burst of radiation, the man would die before he could cut the rope.

For all they knew at the time, a runaway reaction would have devastated Chicago.

So how assured are you feeling now? Nothing to see here?
Posted by Mark Murata at 4:42 PM 3 comments: Links to this post

Wait for the foie gras at the end.

Last night, I dreamt I was on-scene for a website that simulates everyday background noise to help a listener’s creativity. 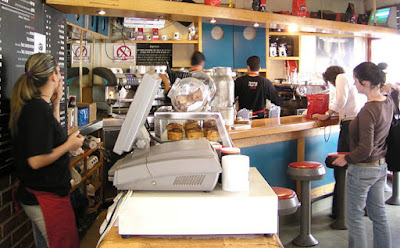 I sat towards one end of an open-air set of a coffee shop. About eight actors of varying ages acted out their roles in ordering coffee and other items while engaging in small talk. They gave their lines realistically, constantly in motion as they walked around the faux shop. I thought they were just going through a cycle of repeating each other’s lines, but they differed towards the end. They gradually left the set one by one, very noisily.

I could see across and to the left another set where a recording was going on at the same time. I cannot remember if it was a coffee shop, but it seemed to me that their voices would be picked up at a low volume for this coffee shop production, which would add to the atmosphere of ambient noise.

After the recording was over, the writer rested his elbows on the border of the far end of the shop, glasses on his brow. He leaned forward and let his forearms dangle, looking defeated. He spoke across the set to the producer, who was standing to the left of me. He asked, “Bad, eh?” referring to his writing.

The producer assured him he had done a good job. The writer seemed to be the typical sort involved in such productions—he mainly saw what frustrated him, not how well everything had worked.

After they left, I walked up to the interior corner of the set, near where the writer had been standing. I saw how realistic the fake brick and the arch for the entrance looked, and I wondered at my naïveté in thinking that the recordings were done in a real coffee shop.

I exited the set and saw to my left a number of sets for dinner parties. One of them was about to start production with a large family dinner party of perhaps ten people in a dining room, including adults and children, all in the stereotypical pose of holding their eating utensils upright in their hands.

This was a much more elaborate production. One person at the near end of the set announced he would call room service. (This made no sense, since it was in a home’s dining room.) He called up and ordered a dinner. At the end, he grabbed a pot and struck it against a surface to make a couple of clacking sounds, I think to hurry up service. Just beyond the far end of the set, I saw a man take a large stick and make clacking sounds at the same time, since that would be picked up by the mike more easily.

That done, a couple of chefs, complete with white chef’s hats, began preparing the dinner. They were also beyond the far end of the set, and a couple of them picked up a pair of immense geese. They squeezed the geese, making them vomit steaming foie gras into stainless steel pots. 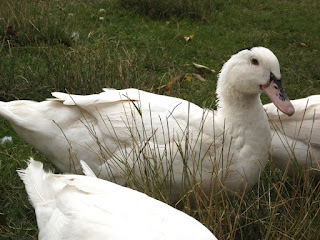 My alarm clock went off, and the dream ended.
(For my Harry Potter dream, click here.)
Posted by Mark Murata at 7:17 AM 1 comment: Links to this post

How would you like one minute to summarize a novel you’ve worked on for over a year? I attended the annual Pacific Northwest Writers Conference, with the main purpose of pitching my manuscripts to agents. This was down in SeaTac. (The unusual name came from this area being between the major cities of Seattle and Tacoma. I’m not kidding.)

Besides the pitch sessions, they put on interesting workshops. A helpful one described how writers should use social media, put on by Joe Gillard and Nicole Persun. 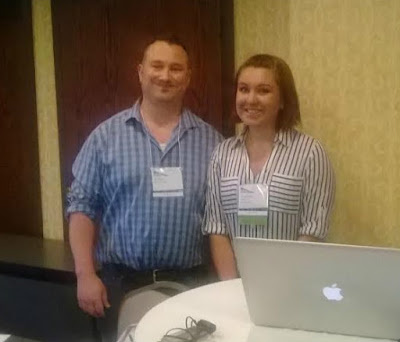 I’ll let you guess who's who

The editors and agents introduced themselves during forums, to give us a good idea of whom to pitch to. This was important for planning our four-minute pitches, which I’ll describe in a moment. Below is part of the agent forum, a little out of focus. 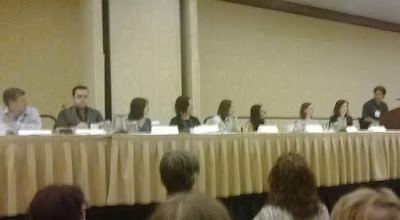 So on to the pitch sessions. In a large conference room, the agents and editors would sit at long tables. When those of us who signed up for a particular session were told to start, we rushed in. It wasn’t as bad as the start of a rock concert—more like the opening of a Costco on a Saturday.

Whoever found his or her preferred agent first had to stand on a blue line that was several feet in front of the tables. The rest of us lined up behind. At the ring of a bell, the first person could walk forward and have four minutes to pitch a manuscript to the editor or agent. We were advised to sum up the manuscript in one minute, then let the editor or agent ask questions for the rest of the time. At the sound of a bell, that person would have to leave, and the next person could go up.

I didn’t get a picture of this year’s pitch session, but this link will take you to last year’s. 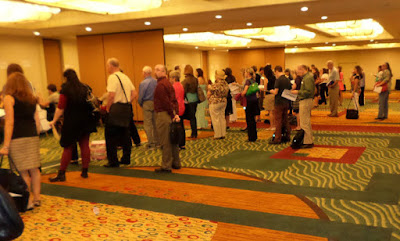 No talking was allowed in line. If you think this felt like school, you’re right.

I put in a lot of rehearsal for my pitches. If you think aspiring actors spend time talking to walls, so do aspiring authors. I did all right in my three pitches. Editors or agents who are pleased will ask the author to send in sample pages. I won’t reveal the results of my pitches, since that would be telling.

A major agent who attended was Andrea Hurst. She made herself available for one-on-one sessions, first come, first served. She gave me valuable advice on a manuscript pitch and a cover letter, which would normally cost a good amount.

Sarah LaPolla said that vampire novels are still unpopular. (The Twilight series, both novels and movies, set off years of submissions to editors and agents, which saturated the market.) She said that only an accomplished author could get a vampire novel looked at.

So this was a good conference overall. Here are links to excerpts from a couple manuscripts that I pitched—an excerpt from a vampire parody, and an excerpt from my reimagining of The War of the Worlds.

Posted by Mark Murata at 4:33 PM No comments: Links to this post