Inception - Sources of the Movie

Alice: I should sue for royalties. Too bad I'm not real.

The movie Inception is very pretty, but very boring, so while I was watching the movie I took the time to crack the code on where the characters came from.

Come on, you should know this. The characters are: A madman, a prim young woman, an authoritative person who hacks a lot, a nervous person who leads others on a chase, someone who smiles and changes appearances, an odd person who seems a little druggy, and a minor character who gets hauled off to punishment. As a hint, these characters are going down into a strange
realm where our laws of reality do not apply.

Let's start with the main character, Cobb, played by Leonardo DiCaprio. He's constantly at the point of going mad over his children and his dead wife, his hair is one big cowlick, and he has this wild idea of delving into different levels of dreams, with time running differently on each level
. 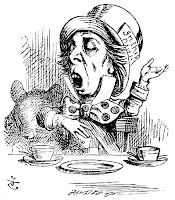 Yes, he's derived from The Mad Hatter. It might seem somewhat comical to compare Cobb's hair to the hat, but the resemblance is there. And The Hatter spoke in riddles about time, and said that time could be sped up or made to stay at the same point indefinitely. What can throw the viewing audience off is that it's some equivalent of The Hatter who is the main character, rather than --

Ariadne (played by Ellen Page). She is a comparatively proper young woman, who disapproves of the madness she sees around her. As the naive character, she needs things explained to her. Also, she uses a pawn chess piece as her link to reality.

She is obviously Alice, the young woman who constantly reproves the odd people she sees in Wonderland. And, of course, the odd characters she meets explain themselves and the surroundings to her, often in nonsensical terms. When she goes Through the Looking Glass, she starts out as a pawn and eventually becomes queen on a chessboard. And when you think of someone like Alice, you think of someone like --

Arthur, a very nervous character who warns Cobb his plans might not work. In a show-stopping part of the movie, he leads some characters in "a merry chase" through a rather claustrophobic hallway, then helps his friends in an elevator shaft.

This is none other than the White Rabbit. He is constantly nervous and tends to be a dis approving sort. He, of course, is famous for leading Alice down the rabbit hole.

The other characters in the movie have their tell-tale roles. Saito is the arrogant, high-ranking Japanese businessman who constantly hacks and coughs after being shot. He corresponds to the Duchess, who is very arrogant, and who sneezes a lot. Eames is the character with the smug smile who changes appearances. He's derived from the Cheshire cat, known for his smile and his ability to disappear and appear. Yusuf is the druggy-looking guy who fixes them up with the chemicals that allow them to descend to different levels. He's obviously the Caterpillar, who smokes a hookah and who tells Alice how to use a mushroom to increase or decrease her size. And the minor character of Nash who sells out Cobb and gets hauled off is the Knave of Hearts, who stole some tarts, and who is brought to trial.

What neatly ties this together is that Ariadne falls through some structures in the climactic scene of Inception as if they were a pack of cards, which is part of the jolt that kicks her team back to reality. And Alice in Wonderland ends with Alice upsetting the jury box and causing the card characters to fly through the air at her, at which point she wakes up.

(It's possible that Mal, the dead wife, is the Queen of Hearts, since Mal enjoys killing people off. And Fischer, the young heir they are trying to swindle, and who is so fond of a childhood picture of himself, may correspond to the real life Lewis Carroll. His real name was Charles Lutwidge Dodgson, and besides writing the Alice tales, he gained some fame for himself by taking childrens' photos. But these last two match-ups are more tenuous.)

Having said all that, I'm not maintaining that Inception is simply a retelling of Alice in Wonderland. Inception certainly is a different story. I'm saying that the characters were derived from Alice.

But the plot of Inception is not all that original. It is very close to the plot of a certain Scrooge McDuck comic book. THIS IS NOT A JOKE. Read the comic book at

I'm not sure if the plot for Inception was derived from the comic book, but it is an interesting piece of cartoon character science fiction.

My professional writing credit so far is the short story "Yeoman Figgs" for Star Trek. It's in Strange New Worlds V, published by Pocket Books. 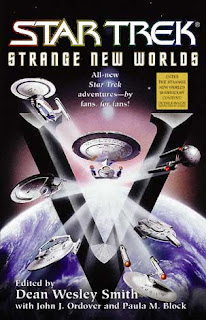 Amazon.com sells it at: Star Trek Strange New Worlds V.
If you want to read the first few pages for free, use the Look Inside feature at Amazon. Look up my name, and you'll see my story starts on p. 33. You can keep clicking on the forward tab to see how far you get in the story before it stops showing pages.

So that's either crafty or geekish.
Posted by Mark Murata at 8:24 PM No comments: