Optimistic Hiroshima Movie: In this Corner of the World

In this Corner of the World is a beautifully animated, memoir-style movie. It focuses on Suzu Urano (married name Hojo). She starts out as a hard-working little girl who loves to draw. When she eventually does marry, she’s not quite certain of her bridegroom’s name. We see a real slice of life as she adjusts to married life in the 1930s.

During the war years, she uses ingenious methods to keep her family fed as the rations they’re issued keep diminishing. Then something horrible happens in 1945. Her home town was a suburb of Hiroshima, and she lives just a train ride away. 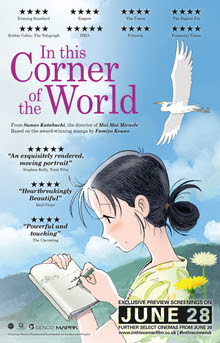 In this Corner of the World is not meant to make Americans feel guilty, or to argue the Japanese side of the war. It simply shows what everyday life was like in a bygone era. And despite what happens, it is ultimately a hopeful and optimistic story—although you have to stay through the end credits to really see this. (I’m told that in Japan, it’s normal to sit through the end credits, so often little extras are shown during or after.)

Many of the background scenes are hand-painted. Whether or not you’re an anime fan, you’ll want to see this movie.

For my review of Your Name, click here.
Posted by Mark Murata at 6:33 PM 2 comments: Links to this post

What if Buffy had Never Been?

Buffy the Vampire Slayer changed popular culture in more ways than one. It paved the way for the incredible dominance of urban fantasy in novels—these are the novels set in our modern times that tend to have women fighting vampires, werewolves, etc. At one point, as I was looking at the science fiction/fantasy shelves of a bookstore, a fellow walked by and complained about the lack of science fiction. “It’s all vampires now!” Although urban fantasy is currently shrinking, it’s still an established part of such bookshelves.

Those who are not into such novels would have noticed the uptick in TV shows set in contemporary times featuring vampires, werewolves, etc. They must have wondered what was going on!

Buffy also changed pop culture in another way. Their musical episode “Once More, with Feeling” was so successful, other TV series went on to have special musical episodes. I find the song “Walk through the Fire” to be one of the greatest popular songs ever written. It’s copyright, so I can’t show you it on this blog, but I’m sure you can find it. That soundtrack is definitely worth owning.

But what if Buffy had never been? 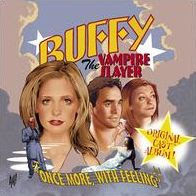 I’m talking about a slightly alternate universe. Many people wonder why Buffy wasn’t that successful in its first season (actually only a half-season in length). Why? It was up against Ally McBeal.

For those of you who don’t know, Ally McBeal had a very different portrayal of the feminine. It featured Ally literally swooning over men she met, and it dominated among young female viewers. As I watched the first season of Buffy and saw how fantastic it was, I knew that many young women who should have been watching it were wasting their time watching Ally McBeal. I was quite concerned Buffy wouldn’t make it.

But for its second season, Buffy was no longer on against Ally McBeal, and the rest is history. But what if Buffy had been cancelled?

Urban fantasy would not have dominated the bookshelves. TV shows with contemporary vampires and werewolves would have been far fewer. Even the movie scene would have changed, since I don’t believe the Twilight series would have been such a raging success without Buffy paving the way. I know that Ally McBeal had its share of musical numbers, but without the success of the Buffy musical, other TV series would not have dared to write entire episodes as musicals.

Joss Whedon, who was the driving force behind Buffy, is now directing The Avengers movies, which are changing expectations for movie blockbusters. But without the culture-changing success of Buffy, he would have just been some guy who felt sorry for the blondes who got killed in horror movies.

So instead of pop culture featuring variations of Buffy kicking a vampire’s head in, it would have been dominated by stick-figured women swooning over the men they liked. Now, isn’t that a nasty alternate universe?
Posted by Mark Murata at 8:50 PM 3 comments: Links to this post