The National Oceanic and Atmospheric Administration has issued a statement on mermaids. This is your tax dollars at work. Let’s see how they did. 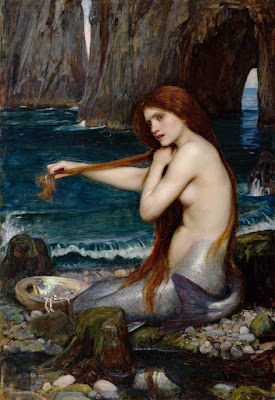 They state that “The ancient Greek epic poet Homer wrote of them in The Odyssey.” No, Odysseus encountered sirens, not mermaids. They were part bird. 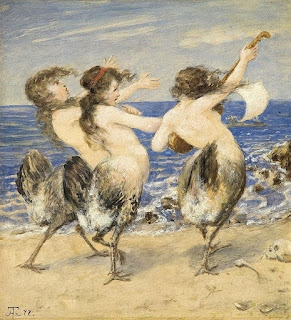 Then they state, “The belief in mermaids may have arisen at the very dawn of our species. Magical female figures first appear in cave paintings in the late Paleolithic (Stone Age) period.” But those were similar to this rotund, faceless carved image. 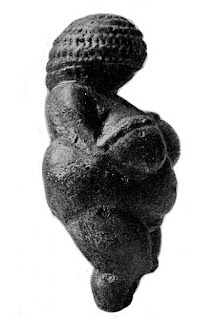 This file comes from Wellcome Images, a website operated by Wellcome Trust,
a global charitable foundation based in the United Kingdom.

They give their final statement: “No evidence of aquatic humanoids has ever been found.” So there. I can’t show their picture of a mermaid, since I’m not sure of its copyright status, but you can see it at their website. It doesn’t compare well with any of the above.
Posted by Mark Murata at 8:26 PM 2 comments: Links to this post

Thomas and his friends, having escaped from the maze, can now relax and get some rest in a quasi-military atmosphere, sleeping in real bunks instead of on the ground or makeshift beds. They don’t have a care in the world—or do they? And where did Teresa go?

Soon they have to go running into the Scorch—the desolated badlands left after whatever apocalyptic disaster devastated civilization. Besides ruined, deserted buildings, there’s not much out there. How will they survive?

So some critics say this is a lousy movie because of the lack of character development. Although we see Thomas (Dylan O’Brien) is the dominant leader, Minho (Ki Hong Lee) is still the strongest and bravest, and Newt (Thomas Brodie-Sangster) is the most able to question Thomas and provide skepticism, we do not really see the personalities of the rest. (Teresa especially is a cipher, but that is on purpose.)

This reminds me of the time that Siskel & Ebert reviewed Rambo III. Ebert said he liked the action but wasn’t sure what to say about the movie overall. With an amused look, Siskel said, “It delivers.” The same is true of The Scorch Trials. Normally I don’t like a movie that is so focused on the action that it doesn’t take a couple minutes to develop the minor characters, but this was a great movie. This was not mindless action where we don’t care about the characters; I cared about whether each character survived, and the action-packed story was interesting.

To kind of state the obvious, I don’t think they could all sprint so fast after being forced to give massive blood samples, or after running out of water while traipsing through a desert. And for the evil organization to be pronounced “Wicked” is kind of childish. But I have to hand it to The Scorch Trials. It delivers.
Posted by Mark Murata at 6:59 PM No comments: Links to this post