Watch out for that Tree

Last Sunday I noticed that one of the tall trees on our church property looked like it had been split in two. It came to an abrupt end where fresh wood was showing. That part of the ground was blocked from my angle as I approached the building, but I could see the tips of some branches sticking up. I hoped it hadn’t hit the building. 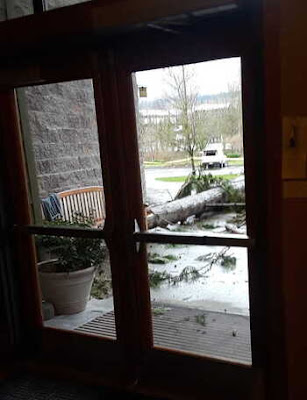 That wasn’t even the half of it. Did I mention it was a tall tree? It was mostly on the roof.

I was amused when a couple young girls ran up in the parking lot, then were stopped by the yellow tape on their side. Then I was told the tree had fallen just an hour before. If it had fallen sometime later, families would have been walking on that sidewalk to get to church.

If you can’t think of something to pray to be thankful for at a moment like that, something’s wrong.

I watched as men on the roof chainsawed off huge chunks and threw branches down.
Posted by Mark Murata at 9:39 AM No comments:

This was on a table of snacks. One woman said if you can’t figure that out, you deserve what effects they have on you. 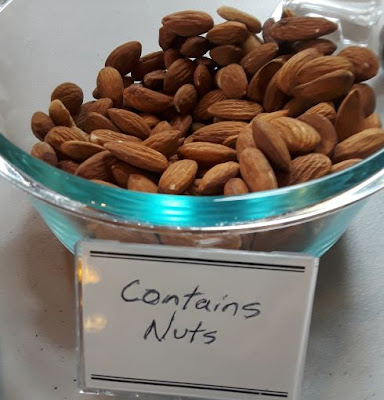 In other news, water is wet, and vacuums suck.

The following picture is kind of the opposite of obvious. Notice how the Revival Sermons of Jonathan Edwards is displayed between the females from the Batman series and Wonder Woman. 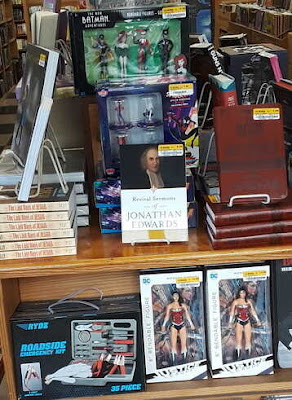 Jonathan Edwards is famous for his sermon, “Sinners in the Hands of an Angry God.”

I think it’s important for writers to write down their dreams. I had this one Monday night.

In my dream, I was in the TV series Dawson’s Creek. I and another guy saw Dawson standing on a short stool. A rope led from his mouth to a doorknob several feet in front of him.

He said he had a toothache, and this was how he was going to pull the tooth out. But he became hesitant about going through with it.

Joey was there. I said, “Joey, grab his feet. I and this other guy will tackle him at his shoulders.”

She bent down and moved forward to grab his feet. Dawson didn’t like the idea, so he waved us off.

Dawson jumped backwards off the stool. The rope pulled his tooth out.

He showed it to us. It was a large molar with faint black streaks on the back. He said that showed where the cavity was inside.

Later, Joey and I went to a dance we had organized. Couples were dancing in a large, dark room in formal styles, holding hands as they went through practiced moves.

Joey asked me to dance. She said it in a non-romantic way—just something to do instead of standing around.

We danced without holding hands. The room around us was black now. I think Cindy Lauper’s song “Girls Just Wanna Have Fun” was playing. I tried to imitate Joey’s moves, saying I wasn’t familiar with this form of dance. She said I was doing it perfectly. 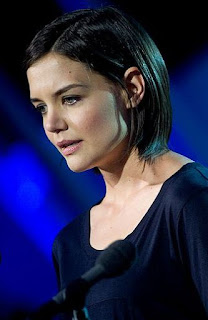 Sources of the dream:

I wasn’t a fan of Dawson’s Creek, but I watched part of the first season. I thought Katie Holmes was pretty, just like Shiri Appleby in Roswell.

My current workplace has Muzak from the 80s. That’s probably where the song came from.

I went to the dentist on Monday. A tooth might have a tiny crack in it too small for their X-rays to pick up. I may need to get a crown.
Posted by Mark Murata at 8:24 PM 2 comments: