As I went up the steps into the University Bookstore in Bellevue, Washington, on a recent Saturday a man in front of me said, “No books left.”

This was part of a group of bookstores that supplied textbooks and memorabilia to the University of Washington, whose main campus is in Seattle. They also sold a variety of books that could be found in a typical bookstore

I didn’t normally go there, but when I heard they would be closing, I decided to visit. 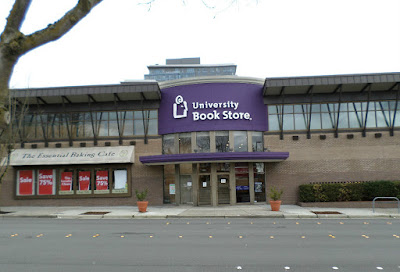 What the man said was not actually true—the books were gone from the area in front of the stairs. To the right, a lot of books were still left, but going fast. All books were 75% off. One man bought a stack of science fiction books he could barely carry. I bought a history book I may review one day.

It reminded me of the recent closure of the Barnes & Noble bookstore at the Crossroads Mall, also in Bellevue. A friend who runs a private school said she should buy her books at bookstores instead of online. I told her that would be a major expense for her, while it would be undetectable by the bookstore. There was nothing we could do to stop these closures.

The University Bookstore in Bellevue closed on February 15.
Posted by Mark Murata at 8:19 PM No comments:

We Were Soldiers Once—and Young

Lt. General Harold (Hal) Moore passed away recently. He was the author of We Were Soldiers Once—and Young. Back when he was a lieutenant colonel, he was in command of the 7th Airborne Cavalry during the Vietnam War. On November 4, 1965, they engaged the North Vietnamese Army (NVA). This was the first major battle between the U.S. Army and the NVA, and they thought they were outnumbered three to one. Now that the government of Vietnam has released many of their records, I believe it was more like four or five to one. They were completely surrounded.

The book describes the battle in bloody detail. Artillery shells blew the bodies of the NVA soldiers to pieces when they launched human wave attacks. Rocket-propelled grenades were used to deadly effect. The main action was with rifle fire. But as the ammo ran out, the fighting could be hand-to-hand. 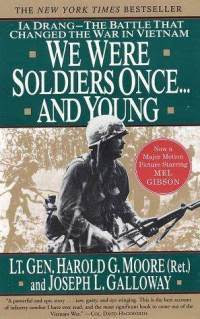 I have read ten books on the Vietnam War, and this one was by far the best. Do you dislike guns or have never read a gritty account of modern warfare? Read this book. (Just as in a previous post, I advised readers who think psychology is bunk to read an issue of Psychology Today.)

Some standout scenes:
-The cutoff platoon: In rapid succession, the lieutenant was killed, the platoon sergeant was killed, another sergeant was killed. Where were the maps? Where were the call signs to use over the radio? And the medic was killed.
-Modern artillery: The artillery was five miles away. But from highly precise instructions from the front of the battle, the artillery shells could land as close as thirty yards to the American troops. High explosive, napalm, white phosphorus. Some were timed to explode in mid-air.
-Crazy pilots: Some would fly less than a hundred feet off the ground, releasing their bombs on the North Vietnamese.
-The home front: This was the first battle in which telegrams notifying family members of soldiers’ deaths arrived while the battle still raged. The Army sent cab drivers—cab drivers!—to deliver them. When one particular officer found out, he insisted that an officer and a chaplain deliver any further ones.

The co-author was Joseph Galloway. He became a real combat reporter. When he arrived at the battle, he tripped and fell on his face in the dirt, along with his cameras, amusing Hal Moore.

When the movie version, We Were Soldiers, came out, Galloway had to excuse himself from a friendly fire scene he knew was coming up. His attempt to save a horribly burned soldier is portrayed with brutal accuracy.

I remember a scholar once saying that Alexander the Great was the first of his soldiers to step over the wall of a city to attack it, and that cannot occur in modern warfare. But it did. Hal Moore was the first to step off a helicopter into the unfriendly landing zone. He was the last to leave, stepping onto a helicopter after what had become a battlefield was cleared of American bodies.
Posted by Mark Murata at 11:07 AM 3 comments:

If Chins Could Kill—Book Review

Bruce Campbell’s If Chins Could Kill: Confessions of a B Movie Actor is a surprisingly detailed account of all aspects of his life that relate to movie-making. This started in childhood, where he went beyond making G.I. Joes look wounded by burning them to charging fees for a makeshift golf course to purloining construction material to build a tree fortress.

Perhaps the most fascinating part describes how in high school Campbell acted with friends in a number of super-8 movies, made for a hundred dollars each that would actually play in theaters. By the time he was college age, he had more practical experience than a lot of drama majors.

Like so many who have unorthodox careers, he pretty much skipped college. But what steered him to horror movies? He had mostly done comedy, but he and his friends noticed that a scary scene in a horror movie always made an audience react. Campbell eventually made the lower than low budget Evil Dead movies, and the rest is history. 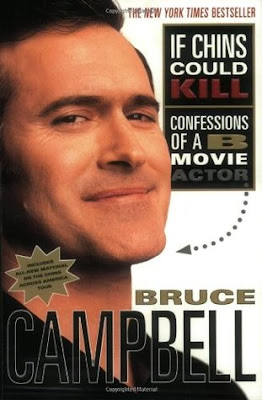 It’s hard to convey how uproariously funny If Chins Could Kill is. No matter how serious the event or how rocky the road to movie-making was, Campbell will describe it all with wry humor and exaggeration, as if his entire life has been one grand wink at his audience.

Almost every page has a photo or a diagram on it, which I’ve never seen in an autobiography before. This includes a diagram of how holes were cut into a floor so actors could stick their arms and legs through, to be filmed as disembodied limbs. (Remember: lower than low.)

He even goes into fundraising, which most books of this sort don’t describe. It was a matter of approaching businessmen, relatives, friends, and friends of friends, and trying to talk them into forking over money for a share in whatever profits the movie will make. I think most books don’t cover this because the process is so humiliating.

To stipulate: Chins does not cover the current Evil Dead series on Starz. But even if you’re not an Evil Dead fan (and I’m not), you’ll find this book hilarious.
Posted by Mark Murata at 7:54 PM No comments: