Since the attempted assassin of Ronald Reagan has been released, I’ll reprise my review of Rawhide Down from my original post, slightly altered at the start.

One of my picks for best non-fiction is Rawhide Down: The Near Assassination of President Reagan by Del Quentin Wilber. I remember when the news came in that President Reagan had been shot. On March 30, 1981, a gunman opened fire on Reagan with explosive bullets, one of which ricocheted off the presidential limousine and entered Reagan’s chest. Fortunately, it didn’t explode. 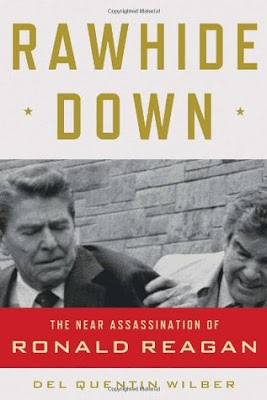 Reagan survived, but did you know:

-The Secret Service did not have professional training until relatively recently. That’s why during the Kennedy shooting the driver slowed down after the first shot, the way anyone would.
-When Reagan was in the OR, he took the oxygen mask off his face and quipped, “I hope you’re all Republicans.” This assured the nation that he was all right. In reality he was in great pain at that moment, and he had almost died.
-A doctor in the hospital responded to the call, looked the patient over, then was shocked when he saw the face. The patient was President Reagan. Then he realized there were all these men in suits standing around.
-Another doctor was operating on the president. He looked up and asked if anyone else had been shot. What was going on outside? Had World War III started? The men in suits stared back at him, saying nothing.
-Nurses stayed with Reagan around the clock, often after their shifts were done. He passed funny notes to them, endless jokes and quips written in weak handwriting.

This is a fantastic book on a crucial moment in history. Wilber notes how professional the Secret Service was: In all the transcripts of their radio calls that day, they never said that the president was shot, or that Reagan was down. He had to be referred to by his code name of Rawhide.
Posted by Mark Murata at 8:12 AM

Awesome. I haven't read much about the attempted assassination, but I got a few chuckles out of this.

I remember when the news came in that Reagan had said “I hope you’re all Republicans.” That made everyone in the room feel relieved.